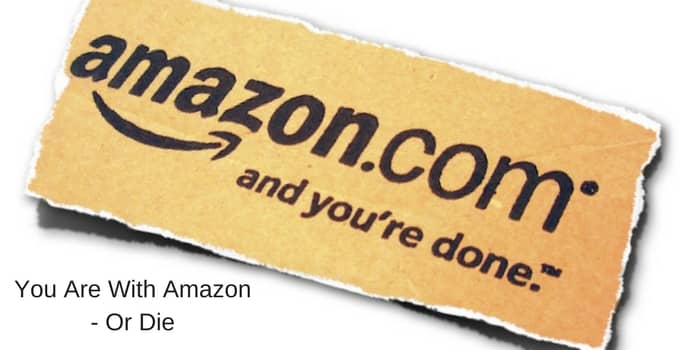 I have been doing a lot of hand-wringing recently about moving all of my ebooks into Amazon’s Kindle Direct Publishing Select programme, and by doing so, granting Amazon exclusive rights to my ebooks. I wrote about this in my last post, Should I Publish Exclusively With Amazon?

Yet my dilemma is small fry compared to the decisions that major publishers have to make each time their distribution contracts come up for renewal with Amazon. The latest battle of the giants was between HarperCollins and Amazon, which followed a similar episode of tooth gnashing, threats and miles of editorial argument when it was the turn of Hachette to negotiate the renewal of their contract with Amazon. In both cases, it all turned nasty for some months, until, all of a sudden the deals were done.

In truth, the Big Five publishing houses may be big, but at the end of the day, Amazon is far, far bigger when it comes to selling books and ebooks, and has by way of its near monopoly of online book selling, leverage that it can use every time a major contract comes up for renewal with the Big Five. For all the screaming, yelling and complaining, the Big Five know that without Amazon, their book sales, and therefore their bottom lines would take a huge tumble if they parted ways with Amazon.

In the current market, common sense says that you are either with Amazon, or die.

So back to my decision, which of course did not involve a bitter three months of negotiation for me with Amazon. Yet I did have to negotiate with myself. As a firm believer in independence, granting my ebook rights away, even if only for periods of 90 days, went against my grain. In a perfect world, other ebook retailers and aggregators would be able to compete and offer alternatives for Indie authors and publishers.

But it is not a perfect world, and the reality at present is that if you are an independent author and want to sell ebooks and make some money, there is only one logical means. Amazon and KDP Select.

I made my decision last weekend to start moving a few of my ebooks over to KDP Select, and can report that over only the last seven days, which included one free ebook promo, I sold more ebooks on Amazon than I sold over the last 12 months on Apple, B&N, Kobo and Smashwords combined.

I am now in the process of completing the move of all of my ebooks, as no matter what my idealistic notions about independence may be, I cannot argue with reality. I’m With Amazon – I’m Done.

You Are With Amazon – Or Die