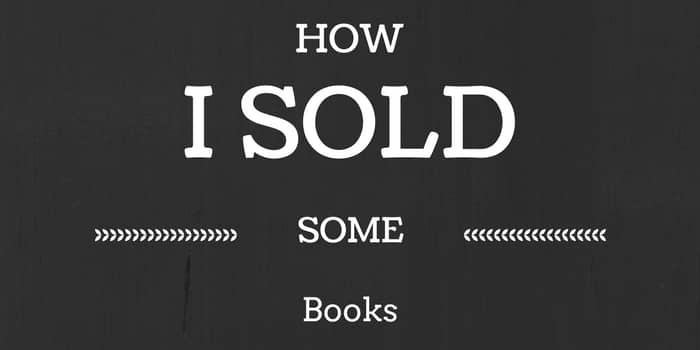 Oh look, I sold some books!

I don’t really know how it happened, but in the past week, a bunch of people spread somewhere across this planet bought some of my books. Mostly ebooks, yet even some real paperbacks versions too. Now I’m not talking millions of copies in seven days, but enough to bring me a great deal of satisfaction. If I compare this past week with many weeks that have passed before it, I would have to say that it was a very, very good week indeed.

Being such a good sales week, I thought I should investigate why it was so, and try to find the magic element or elements that created this phenomenon. Then of course endeavour to repeat what I did right and have a good sales week again next week. So here’s a little rundown of my book promotion actives for last week.

I was bored to death with Facebook so I didn’t bother posting anything at all last week. In fact, I only clicked on my Facebook profile once to see if my daughter might have posted a new photo of my grandkids. She hadn’t.

When I checked Twitter early in the week, my direct message inbox was full of spammers inviting me to go to, buy, try or invest in a whole pile of crap. I wasted ten minutes deleting them all. However, I did invest another few minutes checking my new followers and followed back a few interesting humans. The other few hundred I ignored because I had already wasted ten minutes deleting all their spam from my direct message inbox.

I went shopping and bought some very nice rosé.

My students occupied my time for a good part of the week and kept me at a wonderfully safe distance from any device that could access the Internet. In between classes I read a book.

I spent a lot of time during the week walking my dog and talking to people I met along the way.

Apart from the above and the hours I spent eating, drinking and sleeping, I happily wrote stuff. Probably clocked up 25,000 words for the week.

Now I wonder, which one of these elements drove all those people to buy my books?

How I Sold Some Books

13 thoughts on “How I Sold Some Books”