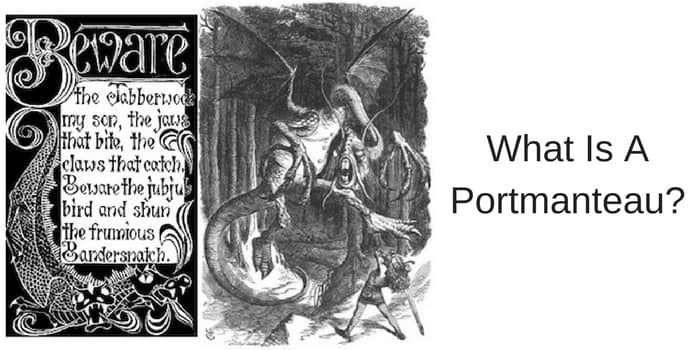 What is a portmanteau in grammar?

When I formed my publishing company (Portmanteau Press LLC), I was shocked and appalled that I received the following question from numerous people (my CPA, the lady at the bank, my mother!): what is a portmanteau? Now, I feel the need to educate people about this wonderful language device. Being that Derek’s blog is called “Vandalism of Words,” I felt this was an appropriate forum.

A portmanteau, in short, is when you take two words and squish them together to form a new word. For example, you have a meal that is halfway between breakfast and lunch? Brunch. You have an eating utensil that is a cross between a spoon and a fork? Spork. Very simple and easy to understand. But why is it called a portmanteau?

You can thank Lewis Carroll, one of my inspirations as a writer. A portmanteau, in English practice, was just a suitcase. It is, itself, a French portmanteau of the words porter (to carry) and manteau (a cloak or mantel). Carroll used the word in Through the Looking-Glass to explain some of his adjectives that described the Jaberwocky. Slithy combines lithe and slimy. Mimsy combines flimsy and miserable.

Modern media has taken portmanteaus to a level that is absolutely atrocious: celebrity name-combining. Brangelina (Brad Pitt/Angelina Jolie) and Bennifer (Ben Affleck/Jennifer Lopez) are not clever portmanteaus. They are abominations and slights to clever wordplay masters that use the device properly. I cringe every time I hear one of these celebrity name portmanteaus and get a strong urge to kick a small animal (I resist!).

There are tons of words that are used in the English language now that many people probably do not even realize are portmanteaus: motel (motor/hotel), smog (smoke/fog), squiggle (squirm/wiggle), and gerrymander (Elbridge Gerry/salamandar). At the end of the day, I would guess that most people use a portmanteau word at least once or twice daily and do not even know what it is they are using.

Spread the word. Don’t let this lack of understanding continue. In closing, I have a question for you, dear reader: what is your favorite portmanteau word?

What Is A Portmanteau?

21 thoughts on “What Is A Portmanteau?”