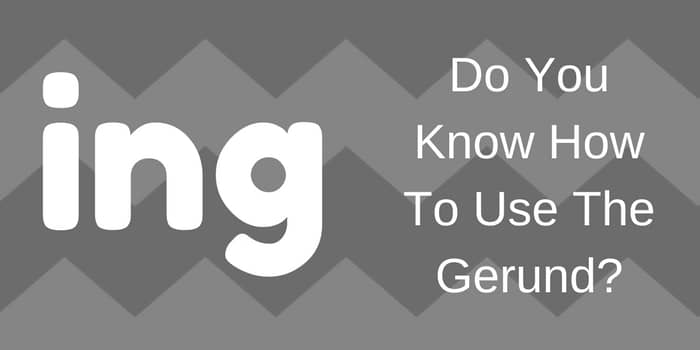 How well can you use the gerund?

One of the most used, but misunderstood points of grammar is the gerund. Although it is something that as writers we use naturally and without thinking, a little understanding of its use can improve one’s writing considerably. Especially in forming interesting sentence forms that avoid overuse of the standard subject-verb construction.

So, let’s have a look at this wonderfully flexible grammar point. There are four basic rules governing the use of the gerund.

The gerund is the -ing form of a verb that is used as a noun but is not to be confused with the present participle, which is always preceded by the verb ‘to be’. For example, We enjoyed visiting the Stock Exchange. The children kept disturbing their father. Yesterday I quit smoking for the thirteenth time. Compare: I like swimming.  I like chocolate. Swimming and chocolate both being nouns.

Frequently, the gerund is preceded by a preposition: After seeing the film, we went to a restaurant. Not by working but by thinking about working will we succeed. Despite solving the problem of inflation, the government became unpopular.

Thirdly, the gerund is traditionally preceded by the possessive form of the pronoun: however, in these more liberal times, the object form is also used: She objected to his (him) playing golf on their wedding anniversary.

So try your hand at using the gerund to re-write the 20 sentences below. Good luck! (If you get stuck, the answers can be found here.)

Writers – Do You Know How To Use The Gerund?

2 thoughts on “Writers – Do You Know How To Use The Gerund?”