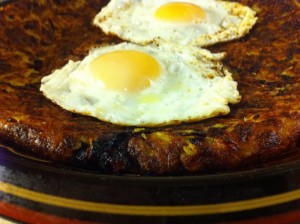 One of my greatest culinary discoveries since arriving in Switzerland just has to be Rösti. Yes, everyone knows about our famous Fondue, but Rösti is much more versatile and can be served in so many different forms and as an accompaniment to so many other foods. However the real fame of Rösti is that it defines the separation of the German speaking population from the French speaking lot with the well-known Röstigraben. The imaginary dividing line between the two languages.

Well, as I cannot call myself and expert in cooking Rösti, I am fortunate enough to be married to an expert. But to ensure true conformity with the recipe, I have decided to give you the following recipe courtesy of Cuisine du Monde. But please note that the image on the left is the Rösti we both ate and enjoyed last night.

Rösti is a traditional Swiss dish of fried grated potatoes, a little like a hash brown. Roesti are usually served as a side, although they can also make a wonderful main along with a salad and perhaps an egg, sunny side up.

In this recipe you can choose to either make one large roesti or 4 individual ones. Firstly peel the cooked potatoes and grate them through a coarse grater. Slice the onions into thin wedges (Lyonnaise). Melt the butter (please resist the temptationto use oil as you will not have the same result!) in a non-stick frying pan and add the onions and sweat them until they look glassy and transparent. Add the grated potatoes and the salt and stir through. Fry while stirring them around in the pan for about 3 to 5 minutes. Press together to form a flat cake and fry over medium heat until there is a golden crust on the bottom. Place a serving platter on the pan and turn the pan upside down, so the Roesti falls on the platter with the crust on top. Alternatively, toss the roesti into the air and flip it like a pancake back into the pan, then slide it onto the serving platter and serve immediately.

Basilean Roesti: Use half sliced onions and half potatoes.

Valaisian Roesti: Once the roesti has cooked; place sliced tomatoes and some Raclette cheese (or any other well melting salty cheese) over the top. When the cheese has melted, serve with the roesti on the bottom, so don’t flip!

I bet you’re salivating and ready to run off and start boiling some potatoes!