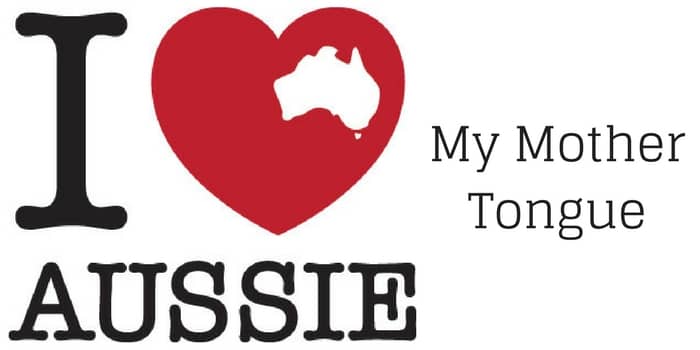 Some of you may know that I’m an Aussie.

Albeit dropped head first into living in Switzerland nearly twenty years ago. While life is just bliss, the one thing I miss is speaking (and writing) in my mother language. Ocker! Just in case you get lost once I change my language into Ocker, or Strine as it is better known, here’s a handy Aussie dictionary to help you out if you get lost.

Strewth Mate! From the time I took a Captain Cook at Switzerland I thought, ‘You bloody ripper’. Just a quick squizz at The Alps and I was stoked! The tinnies were just as good as back in Oz too and the plonk was even better. It did take me a while to nut out the lingo, but speaking Frog is a piece of piss once I got my gob around it.

Now coming from the ‘Coat Hanger’ city in Oz, the big smokes of Switzerland seemed a bit piddly but I just thought, why not give ’em a whirl. Being fair dinkum, and True Blue, I didn’t want to appear figjam, so I kept my gob shut and meat pies open and learnt the ropes. I made a few blues, but no one seemed to think I was a drongo.

My first big discovery were mystery bags. Bloody rippers and even better than the ones back home I used to cook for my ankle biters. No porkies, the snags back home don’t come within cooee of these snags. And brekkie isn’t bad either. I was grinning like a shot fox at the sight of the grub they have here. Better than a dingo’s breakfast back home.

I spat the dummie a few times, but my trouble and strife calmed me down and told me I was London to a brick on to settle down like a pig in poop in Europe. I did feel like a fruit loop a few times, but with the Cook’s help it’s been a doddle. I’ll be stuffed if I’m not the whole hog Swiss now! The only things I miss are utes, footy, middies and Sat’dy arvo at the cricket.

Then there are the sheilas! Real lookers. Being from the back of Burke, I didn’t want to look like a dag, but bloody hell they are great eye food. Dead set! Finding a pozzy on a terrace close to the frog and toad and having a perve is better than sitting in Woop Woop admiring bloody ships of the desert while munching on a cold dog’s eye and dead horse!. The trouble and strife doesn’t mind too much. She knows I’m a bit of a hoon at heart and am really more interested in the coldies anyway.

So I might be a Claytons Swiss, but I gotta tell ya cobber, for a Sandgroper I’m lairing it up and having a rip snorter of a time. No worries Mate!

5 thoughts on “My Mother Tongue”