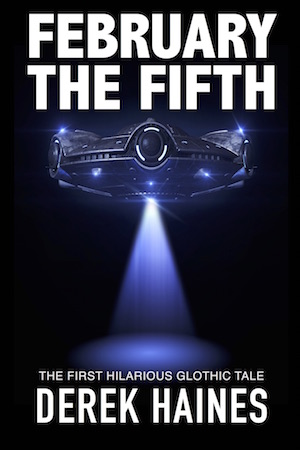 More great reviews continue to be published for February The Fifth. It makes a writer’s day to get reviews, especially when they are as wonderful as these.

By Mary Crocco
This review is from: February The Fifth (Paperback)

February The Fifth, is the first book I have read by Derek Haines. It was an easy read with slight touches of science fiction and comedy throughout. There was no shortage of characters, some of whom the reader would most definitely relate to thereby making the book more enjoyable.

I think young adults would be the target audience for Derek’s book. The learning curve for the characters unexpected responsibility and out of this world (literally) adventures would be enjoyed most by middle-school age children. I can picture the variety of favorite characters and the children’s reasoning for their choices as a productive writing project. The book is rich with description for both characters and places that would undoubtedly spark children to improve their writing skills. What a great compliment to an author!

As an adult and inspiring writer, I was greatly impressed with the ending. Derek’s words in his last paragraph, his last two sentences, could not have been written more perfectly to end this entertaining story.

The most loyal of loyal readers.

This review is from: February The Fifth (Paperback)

I really think this is the best Derek Haines book I have read so far. Would rate it 42 if I could…

I am not going to comment to much on the story, others are way better at it than me… Just giving you my personal overall opinion…

Derek Haines juggles with words, like others with balls. The mix of pythonesque and dry accuracy while describing the different characters is hilariously funny. And never boring, because short and precise, yet full of life.

Gloth and its history sounds so very familiar to any swiss person, that I came to think we might have inspired someone a wee bit, with all those laws and regulations, and dose boring pencil pushers etc….

The humoristic and imaginative narrative level is perfect for someone who likes well written, stories about humans in all their incarnations and states… because did we not all suffer from Acne once or twice…

February the fifth is like a song from Paul McCartney or a gag from Monty Python, it starts in one direction and leaves you in a totally different place, then you excepted. Love it!

So to You sir: I thank you deeply for bringing yourself and your work to my attention! This is the beginning of a beautiful friendship.

February The Fifth is available from Amazon and Smashwords.