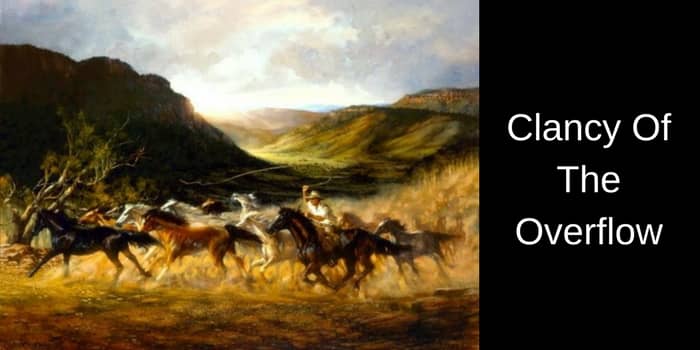 It has been some time since I posted some classic Australian poetry. So I thought I would right that wrong with one of my favourites that opens with an unforgettable line that was burned into my memory in my schooldays.

I had written him a letter which I had, for want of better

I recall my teacher going on for some time about the placement of the comma in this line, as it should naturally follow the pronoun which and create a non-defining relative clause.

Whether ‘Banjo’ knew this, or was using poetic licence, it doesn’t matter. It just wouldn’t read the same if the comma was moved to the grammatically correct position. I hope you enjoy Clancy and Patterson’s wonderful punctuation.

I had written him a letter which I had, for want of better
Knowledge, sent to where I met him down the Lachlan, years ago,
He was shearing when I knew him, so I sent the letter to him,
Just “on spec”, addressed as follows: “Clancy, of The Overflow”.

And an answer came directed in a writing unexpected,
(And I think the same was written in a thumbnail dipped in tar)
‘Twas his shearing mate who wrote it, and verbatim I will quote it:
“Clancy’s gone to Queensland droving, and we don’t know where he are.”

In my wild erratic fancy visions come to me of Clancy
Gone a-droving “down the Cooper” where the western drovers go;
As the stock are slowly stringing, Clancy rides behind them singing,
For the drover’s life has pleasures that the townsfolk never know.

And the bush hath friends to meet him, and their kindly voices greet him
In the murmur of the breezes and the river on its bars,
And he sees the vision splendid of the sunlit plains extended,
And at night the wondrous glory of the everlasting stars.

I am sitting in my dingy little office, where a stingy
Ray of sunlight struggles feebly down between the houses tall,
And the foetid air and gritty of the dusty, dirty city
Through the open window floating, spreads its foulness over all.

And in place of lowing cattle, I can hear the fiendish rattle
Of the tramways and the buses making hurry down the street,
And the language uninviting of the gutter children fighting,
Comes fitfully and faintly through the ceaseless tramp of feet.

And the hurrying people daunt me, and their pallid faces haunt me
As they shoulder one another in their rush and nervous haste,
With their eager eyes and greedy, and their stunted forms and weedy,
For townsfolk have no time to grow, they have no time to waste.

And I somehow fancy that I’d like to change with Clancy,
Like to take a turn at droving where the seasons come and go,
While he faced the round eternal of the cashbook and the journal –
But I doubt he’d suit the office, Clancy, of “The Overflow”.