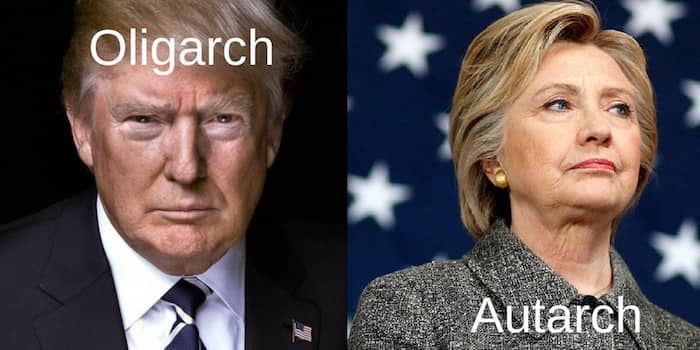 I should have added Donald Trump and Hillary Clinton as characters in my book; God Has Gone Fishing.

Call it a premonition, or a foretelling of impending doom, but the battle of the Oligarchs and Autarchy in my latest book keeps playing out for real now in the media every day.

The battle lines in this year’s US presidential election are exactly what I wrote about when I penned the first draft of God Has Gone Fishing well over two years ago. The anger in this election is symptomatic of a population that has finally come to understand that they have been lied to, cheated, robbed and thrown to the wolves by the one percent, who are now in total control of both power and money.

When I wrote about the negative effect fiat money, which is worthless money printed by governments, has on the middle class and poor, I had no inkling that a presidential candidate would admit to its use. Fiat money enriches the already filthy rich and suffocates the rest.

Donald Trump on the debt: “You never have to default because you print the money”

And Trump on the thrill of buying the mortgages of those poor souls who lost their homes in the financial crash.

Trump said it’s different in the business world, and he noted that he has repurchased mortgages at “tremendous discount” when the market went down. “And I love doing that, and there’s nothing like it, actually, it gives me a great thrill.

In my book I wrote:

… the reality meant that the government obtained the right to crush any perceived threats to economic stability, by any means. Or, in layman’s terms, it allowed the government to ensure that the rich became absolutely protected and that the poor were to be thrown to the wolves. The irony was though, that due to the fact that the rich and powerful were safely keeping billions upon billions of dollars in taxable profits offshore, the government was deprived of the taxation revenue it needed to purchase failing bank assets.

Within a few months, towns, and even cities across the country faced insolvency, and then one by one, they started to fall into bankruptcy, and then, economic and social ruin.

At the same time, the government printed more and more fiat money, which is intrinsically valueless money used as currency because of government decree, which only aided the rich in becoming richer. For the working class, middle class and those unfortunate enough to already be living in poverty, fiat money never made it their way. It was never made to do so, of course. As with all economic calamities before, it meant that it was yet another golden opportunity for the elite to ensure the rich become incredibly richer, and far fewer, but for the rest, and the vast majority, that it meant financial and social disaster.

There are so many parallels to my book that I read every day now, such as the rapid decline of middle-class America, the concentration of power into the hands of the unpopular or even hated, and the rapid movement of wealth into the hands of only the few.

Millions of jobs disappeared overnight, houses and cars were repossessed, and in the last gasps of corporate greed, pension funds were raped, and the assets evaporated into the hands of those who held, and valued worthless government printed money. The middle class, which had been the driver of wealth for decades, almost instantly disappeared, to be dumped headfirst into real and abject poverty. The one percent had won, but what, other than more and bigger piles of worthless money?

Perhaps I was not omniscient when I wrote my book, as all the elements of an impending social disaster were clear well before the start of the US election campaign. Even the acceptance of lies as the truth.

Does Hillary Clinton figure she can say whatever she wants as long as it’s not exposed as a lie that same day?

On Tuesday, MSNBC’s Andrea Mitchell asked her outright: “Have you been contacted — or your representatives contacted — by the FBI to set up an interview” over her e-mail mess?

Clinton gave a flat “no.”

Two days later, news broke that the FBI has already interviewed Clinton’s closest confidant, Huma Abedin, and other top aides. And officials close to the probe say Hillary’s to be interviewed in the next few weeks — which means she’s surely been contacted.

If Clinton tells you the sun is about to rise in the East, it’s probably wise to keep one eye on the West.

With each passing day, I clearly understand that Trump The Oligarch and Hillary The Autarch will do nothing to save the middle class, poor, jobless, hungry and sick. Whoever is elected will matter not as both Trump and Clinton are mere mouth pieces and puppets for either half of the one percent – Republican Oligarchs or Democrat Autarch, who will both ensure the continued destruction of paradise.

The only saving grace is that my book is a work of fiction. Or is it?

If you are interested in my observations on politics, money, greed, oil and war, you can find out more about God Has Gone Fishing on my website or go directly to a preview read using the Amazon link below.

Also available from Apple iBooks, Barnes & Noble, Kobo and many other retailers.

Trump The Oligarch vs Hillary The Autarch – And Lies