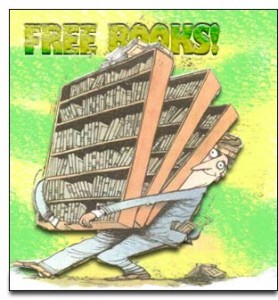 It all started with MP3 players and then of course the iPod. Free music, free music, free music until Apple and iTunes came along and at least settled the digital music market and returned it to some level of sanity. However, the ratio of free to paid songs residing on iPods still remained heavily on the side of free.

Now we have the iPhone and other smart phones, iPads and even e-readers such as Kindle that carry digital music. The screaming, yelling and court cases seem to have come to an end in the great digital music wars, but there are clearly lessons to be learned for the digital book, or ebook.

As with the free music bonanza of a few years ago, ebooks are now the new free digital offering. Whether it be out of copyright classics, author give aways or pirated copies available by bittorent, there is literally a never ending supply of free ebooks to be downloaded for an e-reading device. I have seen many a comment on social media about people being very pleased to have downloaded one hundred or more ebooks at a time. Well, this really makes me wonder.

If I downloaded one hundred songs, I would be able to listen to them all in a few hours. But one hundred books? Perhaps a year or two?

For some reason, free is an invitation to collect for the sake of collecting. But in the case of ebooks it makes no sense whatsoever. I can see from my own book sales statistics that the one free book I offer is downloaded thousands upon thousands of times, but I really wonder how many of these thousands of copies will ever be read. On the other hand, when I see sales of my paid books, I am pretty sure I have gained a readers of those books.

Then again, there is the argument that a free book offering is a way to attract new readers. I go along with this logic, however I think the percentage is quite low. Of the thousands of free copies downloaded, would I be right in thinking that I may have garnered a hundred or so new readers prepared to pay for one of my other books?

Free Ebooks – Do They Get Read?