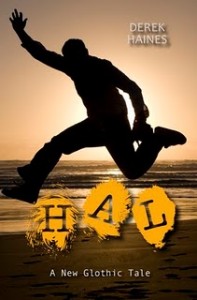 For those of you who may not have heard, I’ve published a new book. Now don’t go rushing off to Amazon looking for a book written by ‘The Vandal’. The book, HAL, is written by my ‘aka’, Derek Haines, who you will find on Amazon. Anyway, on with the show, or teaser or whatever you want to call it. I decided to call it ‘A taste of HAL’.

Halbert wasn’t a bad young lad at all. He just liked a little fun but got a bit boisterous at times. Probably something to do with his jovial nature, large frame, clumsy nature and a passion for rugby, rugby songs and beer. In fact, he didn’t particularly like the punks, Rastafarians or his other ‘edge of society’ acquaintances. It was just that they did such a great job of annoying his father. Although born into the peerage, Halbert hated the restrictive nature of his upbringing and in particular the snooty class system that he was a part of. Halbert just wanted to be Hal. It was probably the Bert part of his name that he disliked his father the most for giving him.

However and finally, as Halbert had reached the age of eighteen, Spencer Hoop decided that he could take no more of his son’s behaviour and propensity to accidentally break things, and arranged for his son to be formally disowned by the Hoop family. His mother, Baroness Hilda Hoop, was extremely disappointed by her husband’s decision as she was rather hoping that young Halbert would grow out of his rebellious ways, and settle down to study law, and then go on to become a QC MP like many of her luncheon friends’ sons had become. Her only other child, Halbert’s younger sister Matilda, was now her only hope. But she knew that a woman could never acquire the QC MP title. She could only hope she learned to do needlework and marry well.

Halbert was therefore invited to leave Hoop Manor, but would be supported by an allowance until his twenty-fifth birthday. His father had presented him with the necessary papers, bank account details and a one-way ticket to Sydney, as he shook his son’s hand for the last time and then promptly closed the door before Halbert had time to get into the taxi that was waiting for him. A few tears escaped from Hilda’s left eye as her son disappeared through the door to be banished forever. Matilda took it as her cue to ask her mother when she could move in to Hal’s room because it was bigger and had an Internet connection. Spencer Hoop just mumbled something about hoping his son was swallowed by a shark. It seemed he wanted his son to obediently disappear from existence.

Hal looked out from the taxi as it headed towards the long driveway to the road. He smiled at the remnants of graffiti that were still just visible on the walls of the manor. He also satisfied himself by making a rather nasty gesture with the middle finger of his right hand towards his now ex-family home.

‘Are you a Man’ United supporter then?’ the taxi drive asked with a smirk.
‘No way. Arsenal.’
‘So where to?’
‘Selfridges in Oxford Street. I wanna buy some Billabong t-shirts and board shorts!’
‘Going swimming?’
‘Yep. Going to Australia.’
‘Ah. My niece lives in Brisbane. Maybe you could look ‘er up sometime.’
‘I’m going to Sydney.’
‘Well, it can’t be far. I’ll give you her address.’
‘Ok,’ Hal agreed to keep his taxi driver happy.’
‘Her name’s Narelle, about your age, maybe a bit older. Her dad’s a policeman I think. She’s my wife’s sister’s kid so only met once when she was about five.’
‘Nice name.’

Hal gripped his door handle just a little bit tighter as the taxi driver started to write out Narelle’s address while steering the taxi with his knees. The sound of the right wing mirror skimming the hedge by the side of the narrow country lane didn’t seem to affect the driver’s concentration as he tried to remember how to spell Narelle’s surname, but it did cause Hal to nervously sneeze. An unfortunate affliction he had suffered since he was a child. Although a number of doctors were consulted, no remedy was found unfortunately. However one diagnosed an allergy to dust, while two others believed it to be a type of nervous tic brought on by stress or insecurity.

‘Berkowski,’ he said slowly. ‘Just can’t remember if it’s B E R or B I R. Maybe B U R. Anyway, I’m sure you’ll find a phone book when you get there.’
‘Yes, thanks,’ Hal replied as the driver swivelled in his seat and passed a piece of paper with Narelle’s address. The left wing mirror now skimming the hedge on the other side of the lane. Hal’s grip on his door handle firmed a little more at the sight of a delivery van approaching, and wondering if the swivelled taxi driver had noticed the oncoming of impending doom. As the driver turned his body back towards a face forward driving position, Hal thought it a prudent idea to close his eyes. He did, then sneezed again. When he opened them a few seconds later, the road ahead was clear.
‘Where’d the van go?’ he asked.
“What van?’ the driver replied.

And yes of course HAL is available for your Kindle or in Paperback. Go to Amazon

A Taste of HAL

2 thoughts on “A Taste of HAL”