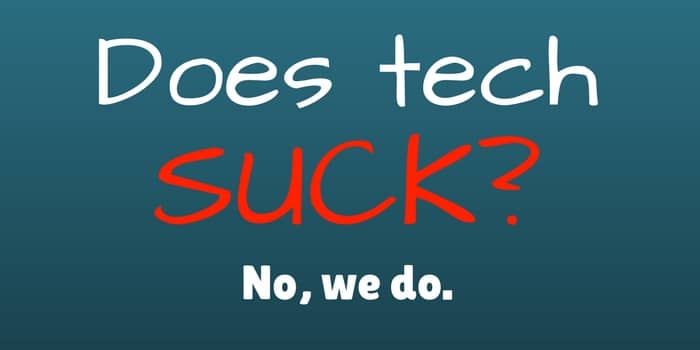 As much as you think technology might suck, we all suck far more.

Technology sucks because we have all abused it. We take it for granted, and worse, refuse to even consider paying the smallest amount for it.

Technology sucks because it puts money in the hands of global monopolies. Technology makes people think that spending $800.00 on a new iPhone is nothing, but that spending $0.99 on a useful app, or even an ebook is too expensive.

Technology sucks because it never rewards those who work the hardest. Take Dropbox for example, which we almost all use. Here is why technology sucks, or that perhaps, we do, via a quote from an article Techcrunch.

As part of that, Dropbox has been making a gradual shift to focus increasingly on sectors that are more likely to pay, such as enterprises. In November, it honed its pitch to business users in an event where it disclosed 150,000 paying business users.

Businesses are a minimum of five individuals, and sometimes many more, but still the proportion out of 400 million users underscores the uphill battle ahead for Dropbox in converting more business users, or building out the business with new customers.

Technology sucks because it has taught us not to value what we use. Out of 400 million Dropbox users, only a miserable 150,000 deem it fair to pay for an absolutely invaluable service.

Technology sucks because it is a word that means that we shall not reward work. Those who work, hard and long, to bring us the very best in technology should not be rewarded with money. No, they can starve while so many millions of us enjoy the fruits of their labour.

Technology sucks because people complain when what they get for free fails to live up to their expectations. Expectations? Expectations? What expectations could you have for something that is free? Well apparently, there are many, as a recent small WordPress mishap illustrated.

A well known free plugin had a small problem with an update and was then carpet bombed with bad reviews and awful insults from frustrated users. Users? Yes, I would call them users but in the very negative derogatory sense of the word.

Again, like Dropbox, this popular free WordPress plugin has millions of users, but only a few thousand who actually pay for the premium version. Oddly enough, the paying users didn’t complain. Why? Because they received premium support to solve the minor issue. Pay a few pennies and a supplier becomes kinder, perhaps?

Technology sucks, only because we all suck. It is not the technology that is at fault, it is us. We take it for granted and refuse to even consider that it as an essential service, such as electricity. Try not paying for your electricity, and you will be welcomed to darkness in a hurry.

Technology sucks because we refuse to consider, even for a moment, the value of hard work and the right for it to be compensated.

Yes, technology sucks, because we still naively believe that the word technology is a synonym for free.

One thought on “Technology Sucks – Let Me Count The Ways”