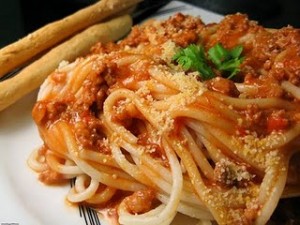 It’s been a while since I posted one of my tried and true Vandal recipes. So in response to the overwhelming number of requests I have had (well one, maybe two), let’s get cooking.

I love simplicity because it makes things a whole lot easier and as luck would have it, some of the greatest recipes are mindblowingly simple. Spaghetti Bolognese must be one of the most popular dishes in the world, but boy, have I tasted some awful attempts at it. Usually because there is just way too much ‘stuff’ in it. You know, a bit of this, a bit of that and the Colonel’s secret spices. Well, there is no ‘stuff’ in real Bolognese. Just the following basic ingredients.

750 grams minced beef and pork (2/3 beef – 1/3 pork) The pork is the secret! You can use veal in place of pork.
1 brown onion diced finely
3 Bay Leaves. (Fresh is better than dried)
6 Nice, Pretty, Red Tomatoes diced finely. (Use a tin if you must!)
1 Cup Red Wine. (Good stuff too. No cheating.)
A little olive oil (About 1 dessert spoon)
Salt
Black Pepper

How to cook your Bolo!

Get a big pot, pan or whatever. I like to use a wok though. (Yes I know, it’s Chinese!) Heat the pot, pan, wok or whatever and add a little olive oil. Now add all the meat and mix it up a bit.

Now this is the really important bit. On high heat cook the living daylights out of the meat until you hear it crackling on the bottom of the pot, pan or wok. Keep mixing it until it starts to look like burnt bread crumbs. If you don’t hear crackling, keep cooking! This is where the flavour really comes from.

When you see little crunchy bits of meat, it’s time to add the onions. Stir and wait for onions to soften. About 4-5 minutes.

Now add the wine and wait for it to almost disappear. But not quite, then add the bay leaves and tomatoes and some salt and pepper. Now cover and lower the heat to simmer for a goodish hour. There should be plenty of wine left in the bottle so have a glass after all your hard work!

Contrary to popular belief, Bolognese is not a competition in redness, so forget the industrial tomato paste and splashes of paprika. If you really want to go redder, use Beef Heart Tomatoes as they colour up very well.