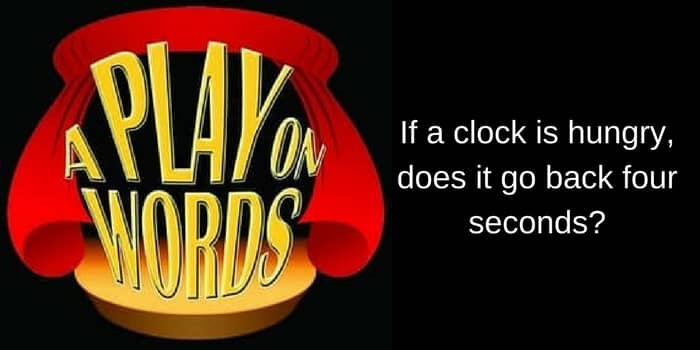 This lovely list of puns arrived in my inbox recently. I tried to find the original version, but it seems it has been posted many, many times. If the original author finds this post, I would very much like to add the source.

1. A bicycle can’t stand alone. It is two tired. (“tyred” in the UK and colonies)

5. A chicken crossing the road … poultry in motion.

6. If a clock is hungry, does it go back four seconds?

7. The guy who fell onto an upholstery machine was fully recovered.

8. You are stuck with your debt if you can’t budge it.

9. He broke into song because he couldn’t find the key.

10. A calendar’s days are numbered.

12. He had a photographic memory which was never developed.

13. The story of the short fortuneteller who escaped from prison … a small medium at large.

14. Those who get too big for their britches will be exposed in the end.

17. When she saw her first strands of gray hair, she thought she’d dye.

21. The roundest knight at King Arthur’s round table was Sir Cumference. He acquired his size from too much pi.

22. I thought I saw an eye doctor on an Alaskan island, but it turned out to be an optical Aleutian.

23. She was only a whisky maker’s daughter, but he loved her still.

24. A rubber band pistol was confiscated from algebra class because it was a weapon of math disruption.

25. No matter how much you push the envelope, it will still be stationery.

26. A dog gave birth to puppies in a public place, and was cited for littering.

28. A hole has been found in the nudist camp wall. The police are looking into it.

29. Atheism is a non-prophet organization.

30. I wondered why the baseball kept getting bigger. Then it hit me.

31. A sign on the lawn outside the drug rehab center … ‘Keep off the Grass’

32. A boy swallowed some coins, and was taken to a hospital. His mother telephoned to ask how he was. The nurse said, ‘No change yet.’

33. The soldier who survived mustard gas and pepper spray is now a seasoned veteran.

Add you own favourite!

6 thoughts on “Playing With Words”