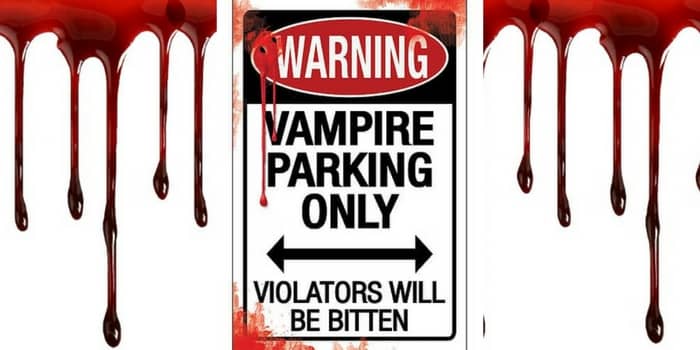 Don’t you just love these vampires who would rather die than park more than three paces from a shopping mall entrance?

Happily blocking all the traffic behind them as they wait for grannie and granddad from somewhere up the country to pack their monthly shopping into the back of their car for the best part of an hour.

Now it may come as a surprise, but these wretched parking vampires also exist in abundance here in Switzerland. What makes it worse, is that they probably spend their entire weekends hiking up 2,500-metre mountains just to get a little air. They are more than likely equipped with $500 hiking sticks and do ghastly things like going on a five-mile jog before breakfast on weekday mornings.

So it’s not because their legs don’t work and are in need of using the disable parking spaces that are reserved for people who don’t have legs that work or any legs at all for that matter. But these vampires want the next best thing. THAT parking place next to the disabled spaces.

Another quality they possess is the classic ostrich approach to people blocked behind them, all honking, shouting abuse and generally making it known to these vampires that they are really pissing the rest of the world off. Big time. They work on the theory that if they don’t look, everything will be just fine. That is; until someone finally decides to ‘toss the teddy out of the cot’, gets out of their now blocked in car and make their way to the vampire’s driver side window.

It is at this point that the ostrich approach has a few weaknesses, and after a bit of angry knocking and shouting of abuse, the vampire looks in disbelief at this animal banging with his fists on his window and pointing wildly in the direction of the now more than 100 cars being blocked by the vampire.

But the well-oiled technique of a practised parking place vampire has this move covered. They look out in disbelief and shock, check that all of their doors are locked, check grannie and granddad’s progress, and stall for a bit more time by looking absolutely confused by the whole situation.

Of course, by now, granddad’s put his shopping caddie back in the collection bay, grannie has finally got both of her legs into the car and is working on the problem of getting her seat belt fastened, and the vampire knows that the end is near. As granddad takes half an hour to at last reverse out of the parking place, and the vampire reaps the reward, the world behind is simply left to wonder. Why?

One thought on “Parking Lot Vampires”