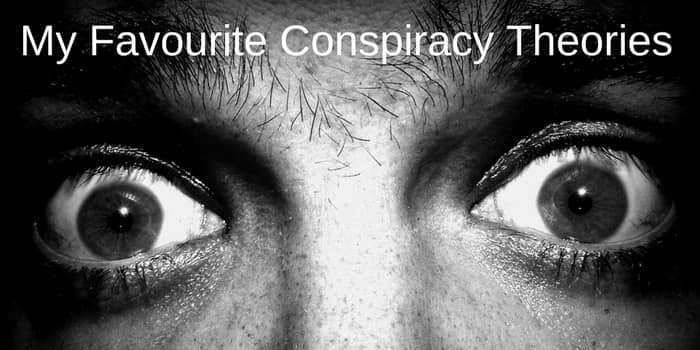 There is something so wonderfully real about them that I just have to read on. The research and painstaking attention to detail of these theories is a testimony to the work some people will undertake to reinforce their underlying suspicions, and this is to be admired. In my mind, the best of them leave me with that ‘what if’ feeling lingering in the back of my brain for weeks. Here are some of my favourites courtesy of Wikipedia. I am sure you have some you would add to my list.

Celebrities
In October 1969, a rumour began circling that Paul McCartney, one of The Beatles, died in a car crash in late 1966 and was replaced by a lookalike. Proponents of the theory, which is commonly referred to as the Paul is dead hoax, cite “clues” in the form of peculiar album covers, possible symbolism in strange lyrics, and backmasking.

Space
Theorists claim that some or all of the Apollo moon landings were “staged” in a Hollywood movie or other studio either because they never happened or to conceal some aspect of the truth of the circumstances of the actual landing (although Mythbusters performed a series of tests that contradicted many of the conspiracy theorists claims).

War
That the Pearl Harbor attack was not a surprise event. US president Franklin D. Roosevelt knew about the risk of a military attack by the Japanese, so he ordered the US Department of State kept it quiet through late 1941.

Assassination
Conspiracy theories sometimes emerge following assassinations of prominent people. The best known is the assassination of John F. Kennedy (1963), which has caused a number of conspiracy theories to develop. Central to this theory is the claim that the injuries received by Kennedy and Governor John Connally could not have been caused by a lone gunman behind the motorcade and to the right. This theory was popularised by the Oliver Stone movie, JFK. Three polls conducted in 2003 suggest that there is widespread disbelief among the U.S. public about the official story of a lone gunman between 68% and 83%.

DTV Transition
Some theorists claim that forced transition to Digital television broadcasting is practical realization of “Big Brother” concept. They claim that miniature cameras and microphones are built into Set-top boxes and newer TV sets to spy on people. Another claim describes use of mind control technology that would be hidden in the digital signal and used to subvert the mind and feelings of the people and for subliminal advertising.

Evil Aliens
A somewhat different version of this theory maintains that humanity is actually under the control of shape-shifting alien reptiles, who require periodic ingestion of human blood to maintain their human appearance. David Icke has been a devoted proponent of this theory. Reportedly the Bush family and the British Royal Family are actually such creatures, and Diana, Princess of Wales was aware of this, presumably relating to her death. David Icke’s theory, which encompasses many other conspiracy theories, is that humanity is actually under the reptillians; with evidence ranging from Sumerian tablets describing the “Anunnaki” (which he translates as “those who from heaven to earth came”), to the serpent in the Biblical Garden of Eden, to child abuse and water fluoridation. This theory has been the subject of several books.

False Flag Operations
Many 9/11 conspiracy theories have been presented to explain the September 11, 2001 attacks, many of them claiming that individuals in the United States government knew about the attacks beforehand and purposefully allowed them to occur, or orchestrated the attacks themselves, as a pretext for the “War on Terror“, wars in Afghanistan and Iraq, increased militarization, expansion of the police state, and other intrusive foreign and domestic policies by which they would benefit. Proponents point to the Project for the New American Century, a conservative think tank that argues for increased American global leadership, whose former members include ex-Secretary of Defense Donald Rumsfeld, former Vice President Dick Cheney and several other key Bush administration figures. A 2000 report from the group stated that “some catastrophic and catalyzing event — like a new Pearl Harbor” would be needed as a pretext for carrying out their plans for “United States global hegemony” in the 21st century. The 9/11 Truth Movement is the self-bestowed name of those who seek the purported “truth” about 9/11.

I am off for some more conspiracy theory reading. Keeps me occupied for hours.

My All Time Favourite Conspiracy Theories