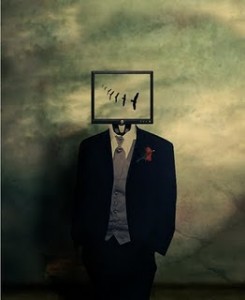 As some regular readers may know, this blog is written by me, The Vandal. A mystery man to many and known by only a very few. As opposed to my overt and shamelessly commercial ‘aka’, Derek Haines, I struggle with the concept of seriousness. Now this is not to say that I cannot write about serious subjects. It is just that usually these supposedly serious subjects are just so so funny that I cannot help poking fun at them.

I mean, why sit around crying into your milk when you can have a good giggle? I know I have covered topics from birth to death and a lot of funny stuff in between, but what I think I really lack is literary credibility. So to make up for this failing, I have decided to devote this blog post to my ‘aka’ and quote a little bit of his serious writing. So here we go with a change of heads. Oh, I mean hats. Well, whichever. Here’s a little seriousness from Milo Moon.

“Good morning. I’m here to collect you,” the man said.
“Why are you sort of semi-transparent?” Milo asked surprisingly nonchalantly when confronted by an eighty-five percent visible man wearing an odd looking blue suit. Milo didn’t like blue at all. But the fact that the suit seemed to be made from a seaweed type of substance was what really concerned him. His skin seemed to have a bit of a mauve tinge as well, which didn’t help matters. He was just a little shorter than Milo. So that helped offset some of the negatives.
“Oh, I am sorry. Does it disturb you?”
“Well, yes it does a bit.”
“Right. Hold on. I was in a bit of a rush this morning. Sorry,” the semi-transparent man on Milo’s doorstep replied, and then raised his ring finger on his left hand and pointed it towards his mouth. “Sorry control. Could you just check my beam. Seem to have upset a client here with a bit of transparency.”
Milo looked at the man, with his mouth held open, indicating a small amount of astonishment. A voice emanating from the right palm of the semi-transparent man replied.
“Sorry about that Victor Romeo. You know what it’s like here at the start of a shift. You should be on full power in about ten seconds.”
“Sorry about that. Is that better?” the man asked as he now became fully un-transparent.
“Er. Yes, I suppose so,” Milo replied not knowing what else to say really.
“Look, sorry for being so early, but I have a busy day ahead of me so thought I’d make an early start,” the man said as he started to fumble with a very tatty old green file that seemed to be full of liquid. “Now, here we are. Milo Moon 35WBTR.”
“Sorry?” Milo asked.
“Your name sir. It’s Milo Moon 35WBTR isn’t it?”
“Well, the first bit yes. But not the password at the end,” Milo said rather indignantly. “Anyway, what’s your name? Victor Romeo?”
“Oh no. My name is George. George Smithe. With an ‘E’. Everybody gets it wrong. My father’s fault. Victor Romeo is just the call sign when I’m out of the office. Initials for virtual reality.”
“Virtual Reality George Smithe. With an ‘E’?” Milo asked in complete astonishment at what was occurring on his doorstep. And so early in the day. Then remembering it was Wednesday, so why should he be surprised.
“No, just George,” George answered with no aspect of humour in his tone.
“Oh, I see,” was all Milo could think to say until he stumbled upon some degree of politeness. “Would you care for a cup of coffee George?”
“That’s very kind of you Milo,” George said as Milo indicated the direction to his table for one.
“I recall you mentioned something about you being here to collect me.”
“Yes, that’s right Milo. But let’s get to that after a coffee. I’m really very thirsty. You know what being beamed is like. Dehydrates you like hell.”
“I’ll put the kettle on then,” Milo said quietly and suddenly felt that his mouth was wide open. He closed it, and got on with making coffee for his strange guest.
“I’m sorry, I don’t have any sugar, and only powdered whitener.”
“Oh, that’s fine Milo. I take my coffee black. Well, dark brown in this case,” George said when he saw the coffee and Milo missed the sarcasm completely.

So now you see the contrast between my flippant Vandal style and the serious literary style of my ‘aka’. Glad we cleared that up.

Who Is The Vandal?

4 thoughts on “Who Is The Vandal?”